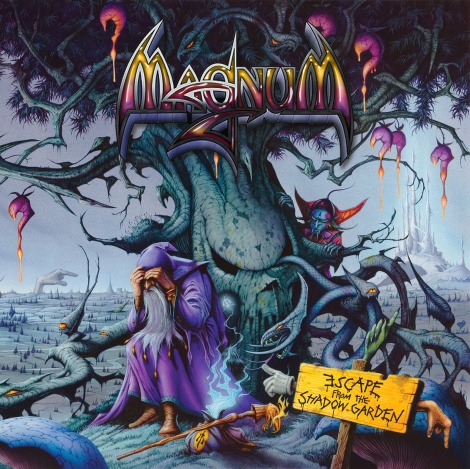 Escape from the Shadow Garden is the 18th studio album from the rock group Magnum (including Keeping the Nite Light Burning and ignoring Evolution). Escape From the Shadow Garden was released on 19 March 2014 in Scandinavia, 21 March in Germany, Austria and Switzerland, 24 March in the rest of Europe, and 1 April in the USA and Canada. As with On the 13th Day the band were hosts to their fans at a record launch party held at the Robin 2 in Bilston on 25 March 2014, the day after the UK release.

The album entered the charts at number 14 in the German Albums Chart,[1] 19 in the Swedish Albums Chart,[2] 22 in the Switzerland Albums Chart[3] and 38 in the official UK Albums Chart,[4] a position last achieved by Magnum with The Eleventh Hour! in 1983; these were Magnum’s highest chart positions in Germany and Sweden since 1990’s Goodnight L.A., and in England and Switzerland since 1992’s Sleepwalking.[5] In addition to these achievements the album reached number 2 in the UK Rock & Metal Charts[6] and number 4 Indie Charts[7] in the UK.

All songs written and composed by Tony Clarkin.