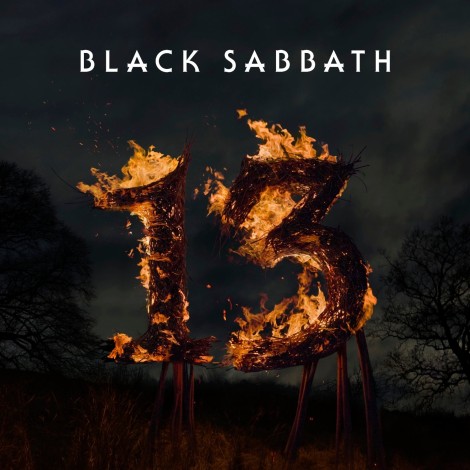 13 is the nineteenth studio album by the British heavy metal band Black Sabbath. The album was released on 10 June 2013 in Europe[1] and 11 June 2013 in North America,[2] via Vertigo Records and Republic Records in the US, and via Vertigo Records worldwide.[3] It is the first studio album released by Black Sabbath since Forbidden (1995), and their first studio recording with original singer Ozzy Osbourne and bassist Geezer Butler since the live album Reunion (1998), which contained two new studio tracks. It is also the first studio album with Osbourne since Never Say Die! (1978), and with Butler since Cross Purposes (1994). This is also the first Black Sabbath studio album since Never Say Die! to not feature longtime keyboardist Geoff Nicholls.

The original lineup of Black Sabbath first began work on a new studio album in 2001 with producer Rick Rubin.[4] The album’s development was delayed because Osbourne was in the middle of finishing his eighth solo album Down to Earth, and the rest of the band members eventually went on to pursue other projects, including GZR and Heaven & Hell. When Black Sabbath announced their reunion on 11 November 2011, the band announced that they would restart work on a new album with Rubin.[5] In addition to original members Osbourne, Butler and guitarist Tony Iommi, they were joined at the recording sessions by drummer Brad Wilk, of Rage Against the Machine and Audioslave, following original drummer Bill Ward‘s decision to not participate in the reunion, due to a “contractual dispute”.[3] The album became available for streaming on iTunes on 3 June 2013.

All lyrics written by Geezer Butler, all music composed by Tony Iommi, Ozzy Osbourne and Butler.

1. End Of The Beginning

Is this the end of the beginning?
Or the beginning of the end?
Losing control or are you winning?
Is your life real or just pretend?

Reanimation of the sequence
Rewinds the future to the past.
To find the source of the solution;
The system has to be repaired.

Release your mind.
Fast forward to the secrets of your soul.
Your life’s on overload.
Is this your fate?

Reanimation of your cyber sonic soul.
Transforming time and space beyond control;
Rise up and resist to be the master of your fate.
Don’t look back before today- tomorrow is too late.

Lost in the darkness I fade from the light
Faith of my father, my brother, my maker and Saviour
Help me make it through the night

The blood runs free
The rain turns red
Give me the wine you keep the bread
The voices echo in my head
Is god alive or is god dead?
Is god dead?

Who do you trust
When corruption and lust
Creed of all the unjust leaves you empty and unwhole
When will this nightmare be over?
Tell me when can I empty my head?
Will someone tell me the answer
Is god really dead?
IS GOD REALLY DEAD?

I watch the rain as it turns red
Give me more wine, I don’t need bread
These riddles that live in my head
I don’t believe that god is dead
God is dead

He’s just a loner.
He never says hello.
A friend to no one.
He’s got no place to go.

He don’t look happy.
He look through furtive eyes.
He aint got nothing.
No one to sympathize.

He hides himself away.
His secrets not revealed.
As life just passes by he keeps himself concealed.

A solitary man.
An enigmatic child.
A riddle never solved.
A prisoner exiled.

I wonder if the loner can assimilate.
A life less lived alone plays devil’s advocate.

Has he ever tried to be happy?
Reached out from inside.
Someone on who he can depend.
It’s getting to late to recover.
He won’t stand a chance and into his own hell he’ll descend.
Don’t descend.

No understanding of things we already know.
He has to live his life and just learn how to let go.

Communication’s an impossibility.
His own best friend but he’s his own worst enemy.
The secrets of his past locked deep inside his head.
I wonder if he will be happy when he’s dead.

Do you hear the thunder
Raging in the sky?
Premonition of
A shattered world that’s gonna die.

In the Age of Reason,
how do we survive?
The protocols of evil
Ravaging so many lives?

Mystifying silence
Talking Peace on Earth.
We should judge each other
For ourselves not what we’re worth.

Sustainable extinction,
A fractured human race.
A jaded revolution
Disappears without a trace.

These time are heavy
And you’re all alone.
The battle’s over
But the war goes on.

Politics, religion,
Love of money too.
It’s what the world was built for
But not for me and you.

Well I don’t wanna live forever
But I don’t want to die…
I may be dreaming or whatever
I live inside a lie!

Days pass by too soon
Waiting for the rising of the moon
No escape from here
Facing death but is your concious clear?

Born in a graveyard adopted by sin,
I cultivate evil that’s living within.
A preacher tried saving my black damaged soul,
Possessed by a demon that had full control.

The time it is coming when all life will end,
With doomsday approaching to hell we’ll descend.
Religion won’t save me, the damage is done.
The future has ended before it’s begun.

Death’s hand and the crazy, I can’t stand the light of day.
Watching all the victims on their knees as they pray.
God of the almighty never answers their call.
Satan is just waiting for the righteous to fall to him.

I don’t mind dying ’cause I’m already dead.
Pray not for the living I’ll live in your head.
Dying is easy it’s living that’s hard.
I’m losing the battle between Satan and God.

A childhood innocence was drowned in your tears.
The demons that you fought are feeding your fears.
The poisoned secrets of your life stand revealed.
The truth destroys you, its no longer concealed.

Dear father forsaken, you knew what you were doing.
In silence your violence has left my life in ruin.
Yeah, in ruin, yeah.

You preyed upon my flesh then prayed for my soul.
Belief betrayed by lust, the faith that you stole.
Indoctrination by a twisted desire,
The catechism of an evil messiah.

Dear father forgive me, I know just what I’m doing.
In silence this violence will leave your life in ruin.
Yeah, in ruin, yeah.

Preacher of theocracy hiding your hypocrisy.
Under false sanctity, holy phoney empathy.
You have taken my life,
Now it’s your turn to die.

Can you sleep at night? When you close your eyes
Do you think of all the pain from your lies?
Or do you deny you’re responsible
For the victims of the sins you devised?

What you gonna tell them when they ask you? Well then
Is your conscience pure in your heart?
There is no exemption when you seek redemption
For all the lives that you’ve torn apart.

Your molestations of the cross you defiled,
A man once holy now despised and reviled.
You took possession while confessing my sins
And now you have to face whatever death brings, yeah.

You try to stop, but it controls you
Your love affair with it won’t last
You’re on a suicidal ride of self-destruction
And in the end you’re gonna crash

I ain’t no hero who’s gonna save you
I just say “hi” as I’m passing right through
I ain’t that crazy, I’m only here for the ride
So please forgive me while I’m trying to find
Some peace of mind

Do you believe every word I say?
Make your own truth, and get out of my way

Do you believe every word I say?
Make your own truth, and get out of my way

Do you believe that I’m from Heaven?
That I descended from the sky?
The graven image of a pseudo icon
To worship me on high?

I’m not your saviour,
I got no wings to fly
Just your pariah
Don’t look to me when your life is over

Ain’t no messiah
Just your pariah

But who am I to interfere
Think for yourself

And keep your conscience really clear

And let your fate be free be free

A dynasty of doubt and hate
Religion, politics, self mutilate
The privilege of being here
All born from nothing til we disappear

And let your fate be free you’re free