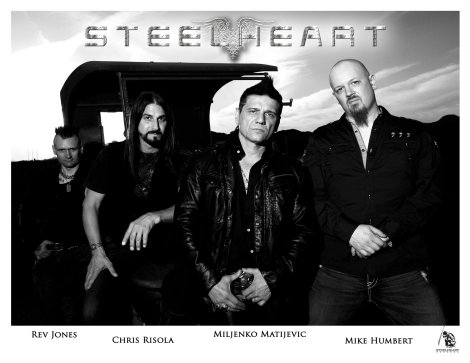 Steelheart is a Hair Metal band based in Norwalk, Connecticut. Formed in 1990, the band is fronted by vocalist Miljenko Matijevic.

Steelheart started off as a rock band called Red Alert whose members included James Ward (bass), Chris Risola (guitars), Jack Wilkenson (drums) and after auditioning, Miljenko Matijevic on vocals. Frank DiCostanzo joined as a second guitarist and John Fowler replaced Jack Wilkenson on drums, after leaving the band Rage of Angels. Recording a four-track demo tape, Matijevic managed to meet artist manager Stan Poses. Poses wasn’t interested but the next day, after hearing the demo tape, called confirming that “Red Alert” had just been given a contract with MCA records. Realizing that the Red Alert name was already taken, the band settled on Steelheart allegedly because of their attitude after trying to get a record deal for so long.

Steelheart released their self-titled debut album in 1990. It sold 33,000 albums on its first day in Japan alone, and quickly hit platinum status. The ballad “She’s Gone” which showcased Matijevic’s wide vocal range hit #1 on the International Charts, staying there for 17 weeks.[citation needed] The ballad maintains its popularity in East Asian region through to today. It has been played by most of the cover bands those performing in the nightclubs in this region almost every night. The second single “I’ll Never Let You Go (Angel Eyes)” reached #14 on the billboard charts, and was MTV‘s 2nd most requested video.[citation needed] The album reached #40 on the billboard charts. “Everybody Loves Eileen” and its accompanying video also garnered much success.[citation needed] The song “Can’t Stop Me Lovin’ You” further showcased Matijevic’s vocal range, but this time, lead guitarist Risola’s guitar skills were also noticed. The accompanying video was another of the band’s hits.

Steelheart’s second album, “Tangled In Reins” with many songs containing sounds more like Guns N’ Roses than its debut. The song “Steelheart” featured Matijevic hitting his highest note of all the three albums. Since grunge invasion was taking force, the album only reached #144 on the billboard charts. However the ballad “Mama Don’t You Cry” charted #1 in many East Asian Countries,[citation needed] including Hong Kong, prompting their Asian tour in September, 1992. The MTV unplugged version in Hong Kong was a success, attracting an audience of over 10,000. After weeks of touring in Asia, Steelheart was later asked by the heavy metal band, Slaughter, to go on tour with them. Nearing the end of the tour, Slaughter asked Steelheart to perform one last show which would occur in Denver, Colorado. The show took place on Halloween night. While performing, “Dancing in the Fire”, a hit from the “Tangled in Reins” album, Matijevic decided to climb a lighting truss, which was improperly secured. Matijevic tried to dodge the massive rig, but without success. The 1000 pound truss hit Matijevic on the back of the head and he fell face first onto the stage, breaking his nose, cheekbone, and jaw, and twisting his spine. Matijevic managed to walk off the stage and he was immediately taken to a hospital. “Steelheart” ended that night.

Four years later, Matijevic formed a new version of Steelheart with Kenny Kanowski (guitars), Vincent Mele (bass) and Alex Makarovich (drums) to record and release the album “Wait”. The album was very different from the previous two albums. The single “Wait” went #1 in many Asian countries, however that was the main area of the album’s success, the grunge invasion causing the American European markets to be near closed to straight-ahead hard rock. Original member James Ward joined Steelheart on the tour supporting the album. Also on the “Wait” album, “We All Die Young”, the first track, was in the motion picture, “Rock Star,” starring Mark Wahlberg. Matijevic stated that “Wait” was the choice of the title because it took a long time to gain freedom from the record company and his greedy manager, who was taking more than what was his.

In 2001, Matijevic provided some of the vocals for Mark Wahlberg‘s character in the movie, Rock Star, a story about a music fan who gets to become the singer for his favorite band. The band itself was made up of Zakk Wylde (Ozzy Osbourne‘s former guitarist and frontman of Black Label Society), Jeff Pilson (Dokken) and Jason Bonham, son of Led Zeppelin drummer John Bonham. The film also featured a re-recording of the song “We All Die Young“, from the Steelheart’s third album Wait. Kenny Kanowski went on to record his new CD with Vincent Mele on bass, and various musicians from Los Angeles. His newest CD is entitled Yabble Diddy Woop Woop which has gotten rave reviews.

According to the Steelheart website, a new album Good 2b Alive was due out November 11. 2008. Currently, the Just a Taste is available to order from the website as well as being available live on their most recent tour of the same name. It features three tracks from the upcoming Good 2b Alive, “LOL (Laughing Out Loud)”, “Twisted Future”, and “Buried Unkind”, as well as the previously released track “We All Die Young”, from Steelheart’s album Wait. The EP is also a preview of what the new players of the band (Mike Humbert on drums and Uros Raskovski on lead guitar have to offer). Steelheart’s new sound is modern and edgy while still retaining overtones of Miijenko Matijevic’s roots. The live Steelheart DVD is also available online. Meanwhile, former drummer for Steelheart, John Fowler, was working on two new projects- the Voodoo Jets and Smoke before his death. He died on 3/21/08 after falling into a coma from suffering a brain aneurysm on 3/17/08.Chris Risola has a guitar studio and rejoined Steelheart for the Just a Taste tour and the touring circle for the album Good 2b Alive. Instrumental guitarist Bill Lonero joined SteelHeart for theRocklahoma festival on July 13, 2008. He was replaced after Lonero left to pursue his band LoNero full-time. Uros Raskovski rejoined the band in early 2009. Uros worked with Miljenko on the new album Good 2B Alive. In 2010, Uros Raskovski left Steelheart once again and the band decided to continue on as a four piece.