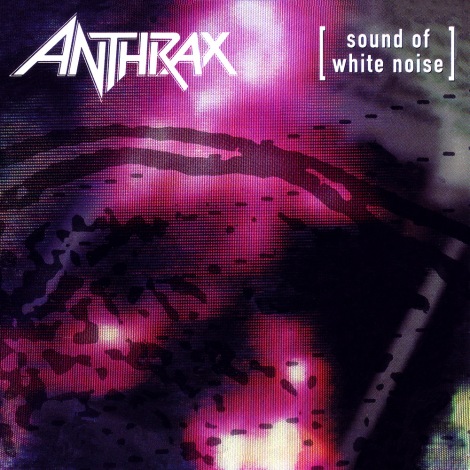 The album, produced by the band and Dave Jerden, includes the singles “Only”, “Black Lodge”, “Room for One More” and “Hy Pro Glo”. This album marked a significant revision in the band’s sound, with the departure of lead vocalist Joey Belladonna and the introduction of grunge influences (Dave Jerden was the producer of Alice in Chains). Typical thrash metal elements such as speed and aggression, which characterized much of Anthrax’s earlier work, are largely absent from their sound at this juncture in their career. The album debuted at No. 7 on theBillboard 200 charts,[1] Anthrax’s highest ever chart position. Sound of White Noise was certified gold by theRIAA.[2] As of 2006, Sound of White Noise had sold about 523,000 copies in the U.S.[3] “Only” and “Black Lodge” charted at No. 26 and No. 38 respectively on the Billboard Hot Mainstream Rock Tracks chart.[1]

The album’s closing track “This Is Not an Exit” is directly based on the Bret Easton Ellis novel American Psycho. This song also includes a sample from the 1991 movie My Girl.[citation needed] A music video was produced for the song “Black Lodge”, featuring actress Jenna Elfman. The Black Lodge is a fictional location in the popular early 1990s television series Twin Peaks. Anthrax were able to persuade Twin Peaks’ score conductor Angelo Badalamenti to help compose the song.