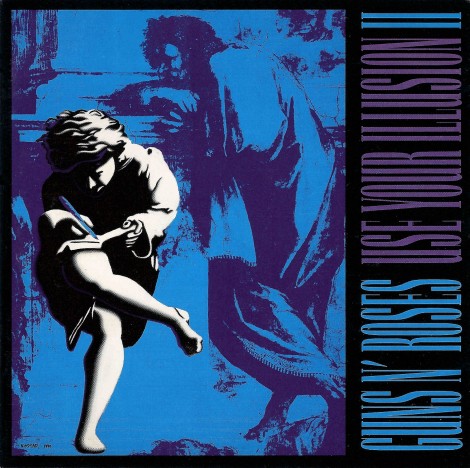 Use Your Illusion II is the fourth studio album by the American rock band Guns N’ Roses. It was one of two albums released in conjunction with theUse Your Illusion Tour, and as a result the two albums are sometimes considered a double album. Bolstered by the lead single “You Could Be Mine“,Use Your Illusion II was the slightly more popular of the two albums, selling 770,000 copies its first week and debuting at No. 1 on the U.S. charts, ahead of Use Your Illusion I‘s first week sales of 685,000.[7] Both albums have since been certified 7× Platinum by the RIAA.[8] It was also No. 1 on the UK Albums Chart for a single week. The album has recently received critical acclaim again in 2011, being featured on Triple M Radio’s Life-Changing Album series in Australia, with the station playing numerous tracks with commentary.[9] This was the last Guns N’ Roses album to feature rhythm guitarist Izzy Stradlin. It also included the last Guns N’ Roses song to feature drummer Steven Adler (Civil War).

The band’s cover of “Knockin’ on Heaven’s Door” had been released almost a year earlier on the Days of Thunder soundtrack, while “Civil War” was debuted at the 1990 Farm Aid concert. That concert also featured Guns N’ Roses playing a cover of the U.K. Subs song “Down on the Farm,” a studio version of which would later appear on the band’s 1993 release of cover songs, “The Spaghetti Incident?”. “Civil War” was released as a B-side to “You Could Be Mine”. The song had also been released on a charity album called Nobody’s Child, a fund-raising compilation for Romanian orphans.

“You Could Be Mine” was released in July 1991 and is featured in the film Terminator 2: Judgment Day. The song was not released on the actual T2 soundtrack. The band also filmed a video featuring Arnold Schwarzenegger in character as the Terminator, with a loose plot featuring Axl Rose as its “target”. The original subject matter of the song dealt with Izzy Stradlin‘s failed relationship with ex-girlfriend Angela Nicoletti.

The Use Your Illusion albums can be considered a single cohesive work, and certain elements of Use Your Illusion II underscore this intent. For instance, both albums have a version of the song “Don’t Cry“, and both have one cover song; “Live and Let Die” by Paul McCartney (Use Your Illusion I) and “Knockin’ on Heaven’s Door” by Bob Dylan (Use Your Illusion II). Each also has at least one track sung by other members of the band: lead vocals on “So Fine” are performed by bassist Duff McKagan and the song was dedicated to Johnny Thunders, who died from a drug overdose before the recording of the album.

The song “Get in the Ring” finds the band lashing out at a career’s worth of critics and enemies. Among those referred to by name are editors of several entertainment magazines.

“My World,” the final track, was a surprise to a few members of the band. The track was essentially Axl Rose solo, and most band members did not even know it existed until the album was released.

To achieve the final mix of the album, the band had some difficulty, especially during the mixing stages of the production of both albums. According to a 1991 cover story by Rolling Stonemagazine, after mixing 21 tracks with engineer/producer Bob Clearmountain, the band fired Clearmountain when he tried to replace the real drums with samples. According to Slash’s autobiography, “one afternoon we discovered a notepad of his where he’d notated all the drum samples he planned to mix in over Matt’s drum tracks” the band decided to scrap the mixes and start from scratch with engineer Bill Price of Sex Pistols fame.[10]

Slash has stated that most of the material for the album was written on acoustic guitars in a couple of nights at his house (the Walnut House), after several months of non-productivity.

“What we’ve got here is failure to communicate.
Some men you just can’t reach…
So, you get what we had here last week
Which is the way he wants it!
Well, he gets it!
N’ I don’t like it any more than you men.”*

D’you wear a black armband
When they shot the man
Who said “Peace could last forever”
And in my first memories
They shot Kennedy
An I went numb when I learned to see
So I never fell for Vietnam
We got the wall of D.C. to remind us all
That you can’t trust freedom
when it’s not in your hands
When everybody’s fightin’
for their promised land

“We practice selective annihilation of mayors
and government officials
for example to create a vacuum
Then we fill that vacuum
as popular war advances.
Peace is closer”**

Yesterday, there was so many things
I was never told
Now that I’m startin’ to learn
I feel I’m growin’ old

“You just better start sniffin’ your own
rank subjugation jack `cause it’s just you
against your tattered libido, the bank and
the mortician, forever man and it wouldn’t
be luck if you could get out of life alive”*

You got your bitches with
the silicone injections
Crystal meth and yeast infections
Bleached blond hair, collagen lip projections
Who are you to criticize my intentions
Got your subtle manipulative devices
Just like you I got my vices
I got a thought that would be nice
I’d like to crush your head tight in my vice
Pain!!!

And that goes for all you punks in the press
That want to start shit by printin’ lies
Instead of the things we said
That means you
Andy Secher at Hit Parader
Circus Magazine
Mick Wall at Kerrang
Bob Guccione Jr; at Spin
What you pissed off cuz your dad gets more
Pussy than you?
Fuck you
Suck my fuckin’ dick

I don’t like you, I just hate you
I’m gonna kick your ass, oh yeah! oh yeah!

And in this corner weighing in at 850 pounds,
Guns N’ Roses

Get in the ring
Yeah

You think anyone with and I.Q. over fifteen
Would believe your shit… fuckhead
Nothin’ but a fuckin’ pussy

When I look around
everybody always brings me down
Well is it them or me well I just can’t see
But there ain’t no peace to be found
But if some one really cared,
well they’d take the time to spare
A moment to try and understand
another one’s despair
Remember in this game we call life
that no one said it’s fair

“There goes the challenger being chased
by the blue blue meanies on wheels
The vicious traffic squad cars are after
our lone driver
The last American hero
The-the electric sintar
The demi-God,
the super driver of the Golden West!
Two nasty Nazi cars are close behind
the beautiful lone driver
The police cars are getting closer-closer…
Closer to our soul hero in his soul mobile,
yeah baby!
They about to strike, they gonna get him,
smash! rape!
The last beautiful free soul on this planet

Once you made that money it costs more now
It might cost a lot more than you’d think
I just found a million dollars
that someone forgot
It’s days like this that push me o’er the brinks
Cool and stressing
(pronounced: kool ranch dres’ing)

You know I never thought
that it could take so long
You know I never knew how to be strong
Yeah, I let you shape me
But it feels as though you raped me
‘Cause you climbed inside my world
And in my songs
So now I’ve closed the door
to keep the cold outside
Seems somehow I’ve found the will to live
But how can I forget you
or try not to reject you
When we both know it takes time to forgive

So nobody ever told you baby
how it was gonna be
So what’ll happen to you baby
Guess we’ll have to wait and see
One, two

Still talkin’ to myself and nobody’s home
(Alone)

When I find all of the reasons
Maybe I’ll find another way
Find another day
With all the changing seasons of my life
Maybe I’ll get it right next time
An now that you’ve been broken down
Got your head out of the clouds
You’re back down on the ground
And you don’t talk so loud
an you don’t walk so proud
Any more, and what for

Well I jumped into the river too many times
to make it home
I’m out here on my own, an drifting all alone
If it doesn’t show give it time
To read between the lines
‘Cause I see the storm getting closer
And the waves they get so high
Seems everything we’ve ever known’s here
Why must it drift away and die

I’ll never find anyone to replace you
Guess I’ll have to make it thru, this time
Oh this time
Without you

(Stradlin’/Rose)
Special thanks to Bernie Taupin and Elton John*

You wan’da step into my world
It’s a sociopsychotic state of bliss
You’ve been delayed in the real world
How many times have you hit and missed?
Your cat-scan shows disfiguration
I wanna laugh myself to death
With a misfered synapse
with a bent configuration
I’ll hold the line while you gasp for breath
You wanna talk to me
So talk to me
You wanna talk to me (7 times)
You can’t talk to me
You don’t understand your sex
You ain’t been mindfucked yet
Let’s do it (3 times)
Oh my distorted smile