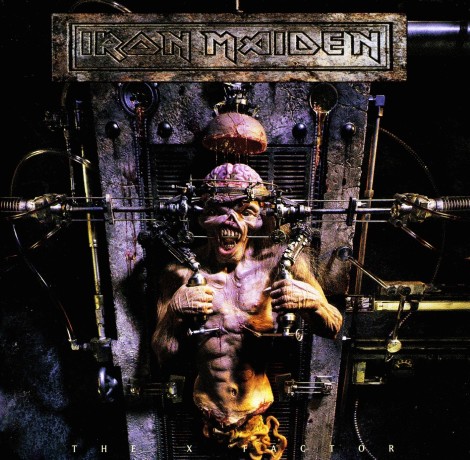 The X Factor is the tenth studio album by British heavy metal band Iron Maiden, released on 2 October 1995 through EMI. It is the band’s first album to include Blaze Bayley, formerly of Wolfsbane, as vocalist, replacing Bruce Dickinson who left the band following their previous tour to pursue a solo career. It is considered Iron Maiden’s darkest album due to the lyrics being based on personal issues surrounding Steve Harris at the time, who was in the midst of a divorce and the death of his father,[1] and the album cover, which depicts the band’s mascot, Eddie, being graphically mutilated throughsurgery.
The album title came about in the early part of the recording. According to producer Nigel Green:

“We all felt that the way things were progressing – the songs, Blaze’s new involvement, the sound, the commitment – the new album really would have that extra quality, that bit of magic, that ‘X Factor’. This became the working title for the album and we liked it, so we kept it. It is also very apt as this is our tenth studio album and “X” can bring up many images.”[3]

The X Factor’s cover art depicts Eddie undergoing another lobotomy and was created by Hugh Syme.[4] Due to the cover’s “lifelike” style,[2] the band were forced to release the album in a reversible sleeve,[5] including a less graphic alternative, showing Eddie from a distance.[6]

This album is also unusual for the band in that it produced several band compositions that did not make it onto the album, with Steve Harris commenting, “We actually ended up doing 14 songs and we used eleven, which is very unusual for us.”[1] All three songs, “I Live My Way”, “Justice of The Peace” and “Judgement Day,” were released asB-sides, while the last two would also feature on the Best of the ‘B’ Sides collection.

Supporting the album was the X Factour tour. Much like the tour for their following album, Virtual XI, several dates in the United States were cancelled as Bayley suffered from occasional vocal issues from the band’s heavy concert schedule.

They’ll be coming to bring the eternal flame
They’ll be bringing us all immortality
Holding communion so the world be blessed
My creator, my god’ll lay my soul to rest

2. Lord Of The Flies

A briefcase, a lunch and a man on the edge
Each step gets closer to losing his head
Is someone in heaven are they looking down
‘Cause nothing is fair just you look around

A briefcase, a lunch and a man on the edge
Each step gets closer to losing his head
Is someone in heaven are they looking down
‘Cause nothing is fair just you look around

Sometimes I wake
I feel that my spirit’s broken
I wonder if I’ve the strenght… to carry on.

5. Look For The Truth

Once a ploughman hitches his team
Here he sowed ? his little dream
Now bodies arms and legs are strewn
Where mustard gas and barbwire bloom
Each moment’s like a year
I’ve nothing left inside for tears
Comrades dead or dying lie
I’m left alone asking why

A lonely cry for help preaching out for help to anyone
A silent prayer to god to help you on your way
I’ve been depressed so long
It’s hard to remember when I was happy
I’ve felt like suicide a dozen times or more
But that’s the easy way, that’s the selfish way
The hardest part is to get on with your life

You’re searching in the dark clutching at straws to find a way
You take the tarot cards and throw them to the wind
You ? question your beliefs your inner thoughts,
Your whole existence
And if there is a good then answer if you will
And tell me of my fate, tell me of my place
Tell me if I’ll ever rest in peace

8. Blood On The World’s Hands

9. The Edge Of Darkness

I know, captain,
That you’ve done this work before
We’ve got a problem
You can help us all I’m sure
The colonel’s gone rogue
And his methods are unsound
You’ll take a PBR up river track him down

I get in from work at 2 a.m. and sit down with beer
Turn on late night TV and then wonder why I’m here
It’s meaningless and trivial and it washes over me
And once again I wonder is this all there is for me

Life seems so pathetic I wish I could leave it all behind
This canvas chair, this bed, these walls that fall in on my mind
Hold on for something better
That just drags you through the dirt
Do you just let go or carry on and try to take the hurt

Feel the paranoia creeping in
Like a cancer eating at the skin
Do you feel you’ve lost your self-esteem
And your self respect, what can you expect

Are you scared to look inside your mind
Are you worried just at what you’ll find
Do you really want to face the truth
Does it matter now, what have you got to lose