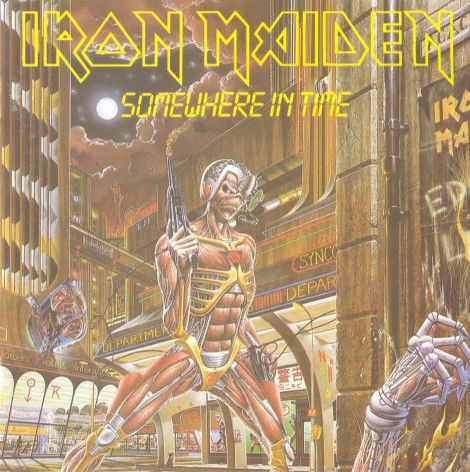 Somewhere in Time is the sixth studio album by British heavy metal band Iron Maiden, released on 29 September 1986 on EMI in Europe and its sister label Capitol Records in the U.S. (it was re-released by Sanctuary/Columbia Records in the U.S. in 1998). The studio follow-up to the hugely successful Powerslave/Live After Death pair, it was the first Iron Maiden album to feature guitar synthesizers.[3]

Since its release, it has been certified platinum by the RIAA, having sold over 1,000,000 copies in the US alone.[4]

Somewhere On Tour was the release’s supporting tour.

Somewhere in Time is notable for lacking any songwriting credits from lead vocalist Bruce Dickinson, whose material was rejected by the rest of the band.[5] Dickinson had written several “acoustic-based” songs, explaining that “I felt we had to come up with our Physical Graffiti or Led Zeppelin IV… we had to get it onto another level or we’d stagnate and drift away,” although Steve Harris “thought he’d lost the plot completely,” surmising that “he was probably more burnt out than anyone at the end of that last tour.”[5] On the other hand, the record is also notable for the number of “fully formed” songs written by guitarist Adrian Smith,[6] who wrote both of the album’s singles; “Wasted Years” and “Stranger in a Strange Land“.

Although “space and time” are common themes throughout the release, with songs such as “Wasted Years,” “Caught Somewhere in Time” and “Deja-Vu,” the band never intended for it to be a concept album, with Steve Harris stating, “We certainly never went in there and said, ‘Right let’s write a load of songs on the subject of time.'”[7] While the majority of the release’s songs have disappeared from the band’s live shows shortly after its supporting tour, “Wasted Years” and “Heaven Can Wait” have often been played since. Performances of “Heaven Can Wait” have featured a group of local fans and celebrities invited onstage to sing along during the song’s middle section.[8]

The record also marked a change for Iron Maiden, as it was their first to use synth, although this style was expanded on with their next release,Seventh Son of a Seventh Son, which added keyboards.[9] This was also their first studio album not to be released a year after their previous one, with the band insisting that they have more time “to get it right without hurrying for a change,” comments Harris.[3] It was also one of their most expensive records, with the bass and drums recorded in the Bahamas, the guitars and vocals recorded in Holland and the mixing taking place in New York.[3]

The 2008 tribute CD Maiden Heaven: A Tribute to Iron Maiden, released by Kerrang! magazine, features covers of two of the album’s songs; “Wasted Years” by DevilDriver and “Caught Somewhere in Time” by Madina Lake.

All songs written and composed by Steve Harris, except where noted.

Make you an offer you can’t refuse
You’ve only got your soul to lose…
Eternally… let yourself go!

From the coast of gold, across the seven seas
I’m travellin’ on, far and wide
But now it seems, I’m just a stranger to myself
And all the things I sometimes do, it isn’t me but
someone else

I close my eyes, and think of home
Another city goes by in the night
Ain’t it funny how it is, you never miss it ’til it’s
gone away
And my heart is lying there and will be ’til my
dying day

[Chorus:]
So understand
Don’t waste your time always searching for
those wasted years
Face up… make your stand
And realise you’re living in the golden years

Too much time on my hands, I got you on my mind
Can’t ease this pain, so easily
When you can’t find the words to say it’s hard to
make it through another day
And it makes me wanna cry and throw my
hands up to the sky

Can’t understand what is happening to me
This isn’t real this is only a dream
But I never have felt, no I never have felt this
way before
I’m looking down on my body below
I lie asleep in the midst of a dream
Is it now could it be the Angel of Death has come for me
I can’t believe that really my time has come
I don’t feel ready there’s so much left undone
And it’s my soul and I’m not gonna let it get away

My body tingles I feel so strange
I feel so tired I feel so drained
And I’m wondering if I’ll ever be the same again
Is this in limbo or Heaven or Hell
Maybe I’m going down there as well
I can’t accept my soul will drift forever
I feel myself floating back down to Earth
So could this be the hour of my rebirth
Or have I died or will I wake from dreaming?

5. The Loneliness Of The Long Distance Runner

6. Stranger In A Strange Land

Night and day I scan horizon, sea and sky
My spirit wanders endlessly
Until the day will dawn and friends from home
discover why
Hear me calling, rescue me
Set me free, set me free
Lost in this place, and leave no trace

[Chorus:]
Stranger in a strange land
Land of ice and snow
Trapped inside this prison
Lost and far from home

One hundred years have gone and men again
they came that way
To find the answer to the mystery
They found his body lying where it fell all that day
Preserved in time for all to see
No brave new world, no brave new world
Lost in this place, and leave no trace

When you see familiar faces
But you don’t remember where they’re from
Could you be wrong?

When you’ve been particular places
That you know you’ve never been before
Can you be sure?

“My son ask for thyself another
Kingdom, for that which I leave
is too small for thee”
(King Philip of Macedonia – 339 B.C.)

At the age of nineteen
He became the Macedon King
And he swore to free all of Asia Minor
By the Aegian Sea
In 334 B.C.
He utterly beat the armies of Persia

By the Tigris river
He met King Darius again
And crushed him again in the battle of Arbela
Entering Babylon
And Susa, treasures he found
Took Persepolis the capital of Persia

Marching on, marching on
The battle weary marching side by side
Alexander’s army line by line
They wouldn’t follow him to India
Tired of the combat, pain and the glory