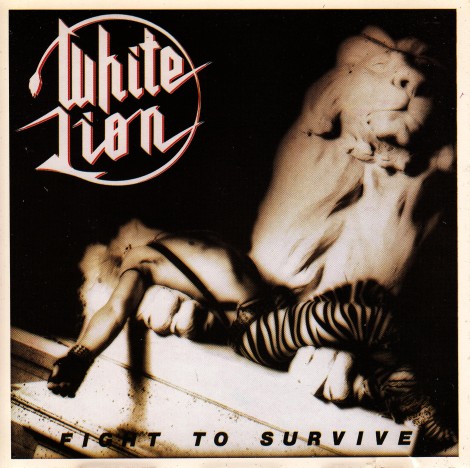 Fight to Survive was the first album by the American/Danish hard rock band White Lion, released by Victor Records in Japan in 1985. The band was signed to Elektra Records, which shelved the album with no intention of publishing it in the USA. Philadelphia-based Grand Slamm Records bought the album from Elektra and released it in America the following year.[2] The album charted at number 151 on The Billboard 200.

All Songs Written By Mike Tramp & Vito Bratta, except where noted.

Remastered versions of the album feature several live bonus tracks. However, these were recorded during the Pride tour by the band’s classic lineup, quite some time after this album.

The track “Broken Heart”, was recorded and updated for the bands 1991 release :Mane Attraction”.

Here I stand, all alone
Trying to fight the pain from a broken heart
Why she left me? I don’t know
It really doesn’t matter anymore
I thought our love could last forever
But here I stand lost and all alone

Start a new day, but not alone
I’m gonna break away from this broken heart
I’ll meet a woman. I’m gonna take her home
(Where) I’ll pick all the pieces and start all over again
I know that life will be much better
Cause I know the (light) will shine again

I know that life will be much better

The sound of thunder breaks the arch
10000 riders side by side
The time has come to end the fight
For their freedom, for their right

And it all began the day that he was born
The boy looks up the sky’s blue the sun so warm
At time spent (that’s numbered)
The young ones on the loose
And the clock keeps turning , times start spinning fast
Cooling off his burning fire, through his soul
He brings on hope, fight for survival
You saw the frantic and he sees it falling down
He feels the emptiness that pushes him towards the ground

As you walk along the shore
Your thoughts run by
The questions are your empty thoughts
thoughts deep inside and you feel like thunder
Since you are on the loose
As the times keep going lives fly by fast
Then you feel you’re growing tired
You say no, look toward the sun, fight for survival
You saw the frantic and he sees it falling down
He feels the emptiness that pushes him towards the ground

Stare down at the river
Look up to the trees
There are signs of confusion
They are frightening me
The glowing, the blue light
The raise from the sun
They’re already changing
Or has it begun
We are people all over
Wanting only to live
(It) is life we are seeking
Hey you must be barely come true

[Chorus:]
(Where do we go)
When there’s no place to (run)
When it’s hot without sun
Tell me where do we run?

This is not an illusion
It is truly (a scare)
All our lives in a frenzy
All our hearts in despair
There are times when we wonder
Will it be life or dead?
And is light we are seeking
Hey you, must be barely come true

When you look toward the city
A monument to there
(And as) you (walk through) to the streets
The people (looking scared)
And there are parts of the city
Where a hand begins
Then the night time arise for his deadly sin
One place in the city where lights (shines) so pity
You think your life’s on the trigger
You saying I don’t care
No, No he don’t care
He walks the street at night
What a lonely soul
With this guys by side he wonders
Why he’s alone
But oh in the city when the sun goes down
The neon light goes on and he’s on the prowl
The black (sky) in the city
The light shining through
When the sun goes down
(they could be on to you)

6. All The Fallen Men

Oh, why don’t you just leave me alone
Your the kind I choose not to know
I don’t want you to see you I am
Your the kind that just tries to (command)
You try to fool me and make me look so blind
And you told so many stories
But the lies you told were only in your mind
Now I ride into the glory

Your mother slapped you when you were born
??? for her circumstance
Another letter and you’re gone
From the word of time carries on
Oh, no you will not continue that way
Ancient feelings that I wrote
Sitting through your inner self
Do you feel you won’t (????)
(till the mindless act your friend performs)
Say no, I won’t let this stand in my way
Just look at yourself and see

Oh, it feels real good
When something’s said and understood
Do you feel the awesome sun?
That’s why you ??? at the time you leave note
Oh, no Do you ?? my existence away
Just look at yourself and see

Can you hear them cry?
Can you see them die?
Can you tell me why?
All the people in El Salvador

10. The Road To Valhalla