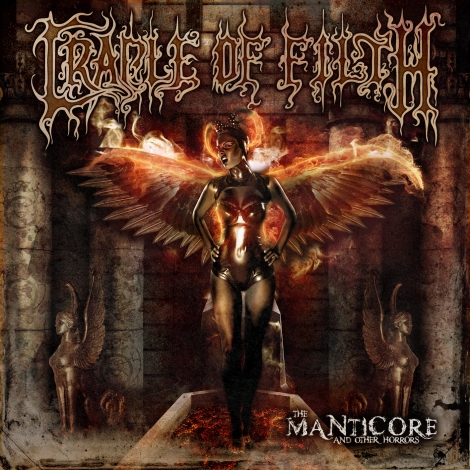 The Manticore and Other Horrors[3] is the tenth studio album by English extreme metal band Cradle of Filth. It was released on October 29 in Europe and on October 30 in USA in 2012.

Guitarist Paul Allender told Ultimate Guitar that “The last thing we want to do is come out with another album that sounds like the last two. We decided to change direction and go back to what we used to do with the female vocals; all the strong melody lines and harmonies… I’ve put a lot of punk orientated riffs back into it again. It’s really gone quite dark and pretty hardcore.”[5]

A press release in August 2012 revealed that the album was conceived as “a bestiary, a collection of stories on monsters,” including “personal demons, chimeras, literary fiends, and world-enslaving entities…” The title track, “Manticore“, was described as being “about a beautiful mythological horror that comes to be feared as the disfigurehead [sic] of foreign occupation in the Indian provinces.” “Illicitus” and “Pallid Reflection” meanwhile, involve “lycanthropy and vampirism“; “For Your Vulgar Delectation” and “Frost on Her Pillow” are “grim fairy tales”; and “The Abhorrent” and “Siding With the Titans” are said to “extol tentacular Lovecraftian values.”[6]

“Frost On Her Pillow” was the first video to promote the album, after “For Your Vulgar Delectation” and “Manticore” were uploaded to Peaceville’s SoundCloud account.

The finalised track listing was revealed by Peaceville in September 2012.[7][8][9]

All lyrics written by Dani Filth, all music composed by Paul Allender and Martin “Marthus” Škaroupka.

1. The Unveiling Of O

I’m climbing up the years to get you
From a dark abyssic scheme
Lovecraftian, part-Martian
To be the beast I used to be

Tonight this world is burning
To a fulsome serenade
Arch nemesis, I’m the genesis
Of a raging plague about to break

Now, the sun it sets
On your nascent best of days

If I am the Devil
I shall honour my spiteful name

Tonight this world is burning
To a fulsome serenade
Arch nemesis, the rest of this
Destructive wickedness is on its way

3. For Your Vulgar Delectation

The moon, one up on the chateau battlements
Gilds this torchlit drive to Shangri-la
This solstice calls like the piper to rodentia
Come join this hive of masqueraders

Decreed
That hunger shall be sated by the dawn

Inhibit nothing, run free
Loose sore cauteries before me
Ripped, prolific scars
Are titbits on which to feed

Decreed
That hunger shall be sated by the dawn

As we walked, our affrighted lanterns
Fed the lengthy shadows with their tallow lullabies
The fragrant night air chilled by sighted phantoms
Clouds drew cobweb threads across a sallow moonrise

That traitor love
Once its spell ran headlong through my veins

Amidst both world I promised her
Eternity would be beautiful

Yet on the cusp
I still not truly dared

Now we walk, our cavorting auras
Feed the lengthy shadows with their sullen lullabies
The fragrant night air filled with haunting chorus
Clouds draw cobweb threads across a bloodied moonrise

Write a story. Any story.
But let it have dragons…

She stalks the shadows, burning
The smoke is thick and reaks of blood
Her hunger an eternal yearning

Tantric, necromantic, a wank fantasy of faith
She religiously feeds
A feverous all man-eater
In the trees I see her eyes like slithering she of snakes
Monstrous this chimera
In her beautiful anger

Gigantic, pyromantic
A beast of naked flame
Panting blackened masses from her opulent Godhead
Ill-barbed are those tongues spread wings eclipse her frame
And in her deep crevasses Kundalini vents unfed

She is the bane of mothers
Grand leveller of Maa Kali’s Mardi Gras
What man would damn the world to summon her?

Be still
Pray silence lest she stoops to conquer

Razor backed, she attacks
Empire’s battle cat
A creature of the white devil’s rule
Mythical and mystical
Provinces will recall the swarm of refugees from her pall

A lick of fire on her lips as silent as a will o wisp
She comes amongst you all, tigressive
Blazing in her pride hellraising horrors from the dark-side…

6. Frost On Her Pillow

Months saw my lost to her elegant, decadent ways
This past midnight cinderella
With a smile like the winter sun
On a misty day
And star-grazing eyes raising cappellas

She fell foul to withcraft’s designs
A weeping willow

Now the lands fall grey, devils revel and obey
A cruel beauty drifted from a dark novella
The queen of hearts tarred
By the cards she’s swift to play
In turrets over all where angels smell her ways

A sore, wilde picture like Dorian Gray
Pressed against the glass in pain
One final graven kiss to say
My love I will avenge
Those fleeting hours of flowers bloomed
Beneath the tree-entangled moon
Why did you have to leave so soon
My illuminary friend?

Fettered from the get go

We are less than worms and vermin

And the Devil never lets go

Grue, no butterfly become
Cocooned in utter guilt
The gutters silt has overrun
My rue transcendence
Sheol builds Golem
And this offence to nature
Is hunting independence

I wander despondent, a curse on the grave
Her hair in my locket, a lock of nightshade
And there in my pocket, I nurse the charade
Her ring is awaiting her back
I watch her from shadows, pariah by day
I sleep in dark belfries and cellars away
From the ungiving living, their neurotic plague
Has turned her, as I to the black

I thrust so perversely, the worst is this crave
For sweet scarlet blood from a harlot parade
Of dutiful victims I beautifully take
With delicious malicious intent
A gift from a goddess who toyed with her game
The price of my night’s infidelity paid
At the altar of her never faltering blade
Of infernal nocturnal descent

So I walk the moonlit quarters
Like a driven beast of prey
A catalyst for madness, slaughter
Given the leash to play

N, n, no, no
I’m not the reason for this bleeding
N, n, no, no
My past is fast leaving me
Aghast in purgatory

So I stalk the moonlit quarters
Like a driven beast of prey
A catalyst for madness, slaughter
Given the season

9. Siding With The Titans

Siding with the Titans

Cast into the ancient dark of Tartarus
Below the underworld
These ancient bastards bore their agonies
Or, locked in slumbrous nightmares
Twixt the spheres or ‘neath the seas
The slept until the righting of the cosmos set them free

Gods fell upon us insects with world-devouring maws

When nature’s emptry bounty died,
I dreamt this tragic sight
We precognitioners just tuned the signal to you all
Amplified, th evision fried, pulsing magnetic stars were right
Vast gates drew open
What slathered forth began the fall

Siding with the Titans

Our last mistakes to which awake
Past masters, mad and cruel
Shalt witness the explicitness of their rule
But I shall be rewarded
And take my place amidst th eblack
For what else is there left to do save usher these monsters back?

I welcome this return

I welcome this return
Mountains of perversion, Elder versions and worse
The mass enslavement of a passive Universe
In nary a day temples were turning

On judgment day
I’m siding with the Titans…

Succumb to this wicked nemesis
The paralysis of hissing imminent danger
His kiss persistent, lips whisper his design

Numb with bliss, licked of menaces
This Philistine itch caught pissing in the manger
Is never distant from unresistant sides

From the dizzying breeze of Quarantania

Lo! The splendour of the throne
The feasting spread of best harvests
Picked clean off the bone
The shining kingdoms
Blent against red sunset skies
And everywhere the scent of better wonders
Set desires to fiery rise

“Tonight
All the stars burning bright are but a canopy for me
A cinderella story, stellar jealousies are rife
For my Prince holds a divine right
Enlightened with the glorious”

Sigh!
His smile’s just a laceration
With a fascination for the massing dark side

And he means war…

Succumb to this wicked nemesis
The paralysis of hissing imminent danger
His kiss persistent, lips whisper his design

Numb with bliss, licked of menaces
This Philistine itch caught pissing in the manger
Is never distant from his soul-corrupted prize

11. Nightmares Of An Ether Drinker