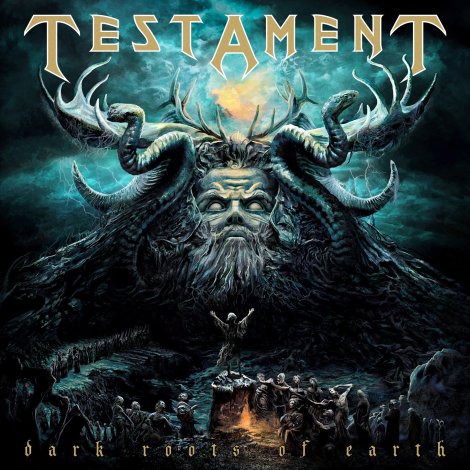 Unfortunately the era of Bonded By Blood, Pleasure To Kill, and Agent Orange is long gone, but luckily Testament took a stab at nostalgia with their newest album Dark Roots Of Earth. And while The Formation Of Damnation, their 2008 release after an almost 9 year hiatus, was definitely a step into the right direction, it was a bit too modern sounding, and I actually didn’t care for Chuck Billy’s vocals on it.

For me, thrash is about shredding guitar riffs, fast and ear-piercing solos and thundering double bass without over using the mighty triggers. And I am happy to report that Testament succeeded in all of the above.

With Dark Roots Of Earth, right off the bat and with the opening riff on “Rise Up” I knew Testament went old-school again a) with their sound and b) oh hell yes, we brought back sing along choruses. I can’t wait to see them live, since the chant: “When I say Rise Up…You say War” will be the anthem from the new album.

Alex Skolnick is THE man of guitar solos, hands down! Not just a little lick here and there, but rather long and drawn out, and most of all memorable, guitar solos. There is also a lot of emotional riffing throughout the entire album without making the whole thing feel cheesy.

Chuck Billy has a very distinctive voice and it’s nice that he went back to his old-school singing style instead of the lower, raspier performance he did on the predecessor.

I believe he sounds stronger than ever and really showcases his vocal range on “Cold Embrace”; the ballad on the album. And while I am not a big fan of ballads on a thrash album, I can easily overlook this, since the fast and galloping tracks do outweigh this flaw.

Gene Hoglan is one of the most versatile drummers in the business today, and it’s no surprise that he almost surpassed himself on this release. Enough said!

To start a song with a bass intro is about as bad ass as it can get, so it was no surprise to me that “A Day In Death” totally delivered in the 4 string department. As a matter of fact, the bass sound is heavy in the mix throughout the entire album.

Even though some of the ideas on Dark Roots Of Earth do sound recycled, the band sure did produce a solid piece. And while some of their peers today go the “we need to progress” route, Testament actually went backwards and delivered a modern, though still classic thrash album.