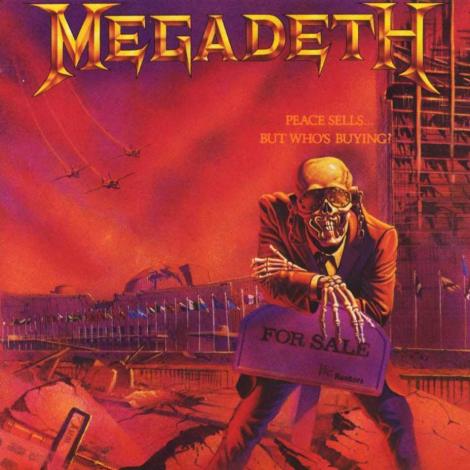 Peace Sells… but Who′s Buying? is the second studio album by the American heavy metal band Megadeth. It was released on 19 September, 1986. Originally, the project was handled by Combat Records, and this resulted in the first mix of the album by co-producer Randy Burns. Eventually Capitol Records bought the rights to the album and a producer (Paul Lani) was hired to mix it himself. It was remixed and remastered in 2004 by Dave Mustaine. In 2011, the three different versions were released as part of the album’s 25th anniversary celebration. All of them, excepting the 2004 mixes, feature new remastering.[5]

It has been listed as one of the 1001 Albums You Must Hear Before You Die and is highly regarded as a thrash metal classic. It is the last album to feature Gar Samuelson on drums, and the last album until The System Has Failed to feature Chris Poland on lead guitar.

Professional rock critic Steve Huey noted the album′s combination of “punkish political awareness with a dark, threatening, typically heavy metal worldview.”[1] For instance, the album′s cover makes an ironic statement about the Cold War. On the backdrop of a red and orange sky, it shows the UN General Assembly building soon after a nuclear attack. In the foreground is the band′s mascot, Vic Rattlehead, who is leaning against a sign reading “For Sale” (“Vic Realtors” appearing on the bottom of the sign on some editions), implying that the United Nations Organization is for sale. The cover and the title suggest that while peace is a popular theme, it has become commodified. These themes carry into the title track, with its strong themes of youth disillusionment. Dave Mustaine lifted the title from a Reader’s Digest article, which was titled “Peace Would Sell But No One Would Buy It.”[6]

“As long as people keep stealing, hurting and mistreating people, there′s always going to be something that you can pick up on and say: ‘Look, this is wrong.’ Granted, we sing about it, but we take a negative approach to what we do sing about. ‘Hey the devil is there, but he′s a moron. That′s why he′s buried in dirt.’” (Mustaine, 1987)[7]

The recording of the album was very difficult for the band, as guitarist Chris Poland and drummer Gar Samuelson wouldn′t show up for hours because of their extreme heroin addictions. Shortly after the band finished the final recordings of the album for the independent label Combat, they were approached by an A&R person Tim Carr of Capitol Records. After securing the contract, the label hired producer Paul Lani to remix the original mixes done by Randy Burns, the previous producer.

“There was even a time when we were considered black metal! When people heard ‘Black Friday’ and ‘Bad Omen’, they thought we were satanic. The worst thing is, like, going to a truck stop in Des Moines, Iowa, and having someone go [imitates southern redneck voice], ‘You guys in Megadeth? I heard you are satanic.’ They expect us to have dead goats and babies in our buses. You couldn′t get any further from the truth!” (Mustaine, 1997)[7]

This is one of the early examples of an album to contain the Parental Advisory label, developed by the Parents Music Resource Center, an organization made to censor music that was deemed “inappropriate.” On the 1986 Capitol Records pressing on vinyl record, it says on the back of the sleeve, “Explicit Lyrics — Parental Advisory.” ‘Hook in Mouth’ on their next album would reflect Mustaine’s opinion of the PMRC & Censorship.

On July 12, 2011, the band re-released the album in both a 2-Disc reissue and a special 5-Disc + 3-LP box set,[8] to commemorate the 25th anniversary of the album.[9] The re-release contains liner notes written by Dave Mustaine and Metallica drummer Lars Ulrich.[10] The 25th anniversary re-release sold just under 2000 units in its first week of release.

All songs written and composed by Dave Mustaine, except “I Ain’t Superstitious” by Willie Dixon.

I sneak in my own house,
It’s four in the morning,
I had too much to drink,
Said I was out with the boys,
I creep in my bedroom,
I slip into bed,
I know if I wake her,
I’ll wake up dead,

[Chorus:]
I wonder, will she find out,
About the other, other lover,
Diana.

Welcome to out sanguinary sect of worship,
Feel at home in our black conventicle,
As we anathematise,
All of those who oppose us,
Don’t summon the devil,
Don’t call the priests,
If you need the strength,
The conjuring. Obey!!!

Behold the flames rise,
From the compass’ cardinal points,
Burn the sacred oil,
And, with the ashes you’ll annoint,

Arrange the symbols,
Of the wizard, and, magician,
Light the candles,
Place the parchment paper in position,
Between its leaves place,
The lash from a black cat’s eye,
A straw of a broom,
Fold, and, burn, and, centralise,

Don’t summon the devil,
Don’t call the priests,
If you need the strength,
The conjuring,

I met your father years ago,
Gave him what he’d please,
He called my name, you’ll do the same,

[Chorus:]
If there’s a new way,
I’ll be the first in line.
But, it better work this time.

[Chorus: (repeat)]
If there’s a new way
I’ll be the first in line,
But, it better work this time.

The light that fills my lonely cell,
Is blocked out by the key,
That locks the door to this hell,
The place they wanted me.
Time’s racing like the wind,
Execution’s near,
Oh lord, I wait for death,
And, yes, I have no fear.
I recall that night, my every breath,
And, step along the way.
Closed my eyes, walking,
As danger paved the way.
The devil, and the darkness
Let her evil wander free
And, here on Devils Island,
The final stop for me.

Oh, there is no escape,
The sea is full of sharks.
The tide takes you away, and
Smashes you on the rocks.
The sun is shining,
But feel not today,
It’s warmth, it’s dying,
And fading away.

Oh, hear the call,
From the grave beyond.
Oh, so pernicious,
Her soul it creates song.
As there is no man, that is
Here upon the earth,
Able to terminate our
Noisome will since birth.

The priest that reads the sermons,
Is walking next to me,
To the stake, my last request,
To have her burn with me.
But, so it did, the heavens opened,
Rain began to fall.
The final judgement came, and
Was spread before you all.
Final judgement.

Old, weak, and feeble,
But the lesson taught to me,
To stay away from evil,
She doesn’t care for me.
She haunts me in my sleep,
Though I tore that page away.
And, here on Devils Island,
I’ll always have to stay.

Hey, I don’t feel so good.
Something’s not right,
Something’s coming over me
What the f**k is this?

Killer, intruder, homicidal man.
If you see me coming, run as fast as you can.
A blood thirsty demon who’s stalking the street.
I hack up my victims like pieces of meat.
Blood thirsty demon, sinister fiend,
Bludgeonous slaughters, my evil deeds.

My hammer’s a cold piece of blood-lethal steel.
I grin while you writhe with the pain that I deal.
Swinging the hammer, I hack through their heads,
Deviant defilers, you’re next to be dead.
I unleash my hammer with sadistic intent.
Pounding, surrounding, slamming through your head. Yeah!

Their bodies convulse, in agony, and, pain.
I mangle their faces, till no features remain.
A blade for the butchering, I cut them to shreds.
First take out the organs, then cut off the head.
The remains of flesh now sop under my feet.
One more bloody massacre, the murders’ complete.
I seek to dismember, a sadist fiend.
And, blood baths are my way of getting clean.
I lurk in the alleys, wait for the kill.
I have no remorse for the blood that I spill
A merciless butcher who lives underground.
I’m out to destroy you and ,I will, cut you down. (Cut you down)
I see you, and, I’m waiting ,for Black Friday.

Killer, intruder, homicidal man.
If you see me coming, run as fast as you can.
A blood thirsty demon who’s stalking the street.
I hack up my victims like pieces of meat.
I lurk in the alleys, wait for the kill.
I have no remorse for the blood that I spill
A merciless butcher who lives underground.
I’m out to destroy you and ,I will, cut you down.

It’s Black Friday, paint the devil on the wall. [8 times]

Down fell the stars, as they
Splashed into the sea.
“Mi nomine Baphomet”,
Come dance with me.
Sacrifice the virgins,
Spiritual rites.
Their master’s time has come,
The moon is full tonight.

Drinking, dancing,
They worship, and toast
The devil, who’s watching,
With demon’s remote.
Fire, rising,
Racing in your blood.
Possessed, naive,
His service is done.

Sinister’s the word,
As the demon’s take their fill.
An orgy’s taking place,
Human blood will spill.
An act of worship,
As they conceive the ghouls.
Satan has their souls,
They sing pagan tunes.
The ceremony,
Is sure to be cursed.
They ask for his blessings,
But, down comes the worst.
Their bodies, soulless,
A corpse from the grave.
Their minds are helpless,
And, no-one can save [x 5],
No-one can save them (oh no). [x 2]

My life’s on time,
But again my sense is late.
Feel a might unsteady,
But still I have to play.
Six to one’s the odds,
And, we have the highest stakes.
And, once again I gamble with my very life today.

Highly polished metal,
The oil makes it gleam.
Fill the terror chamber,
Your mind begins to scream.
Your life is like a trigger,
Never trouble till you’re squeezed.
Now you crack a smile,
As you give the gun a tease.

Place the piston down,
Now give the gun a spin.
Soon as the spinning stops,
Oh no, the game starts in.
A hateful way of vengeance,
A bit of playful sin.
Load another bullet,
Now the second round begins.

A couple grains of powder,
A couple grams of lead.
A touch against the trigger,
A touch inside the head.
Take another drink, and
Raise the last bets.
Think about my last words,
They might be what I just said.
A click comes from the hammer,
That couldn’t drive a nail.
Sense the numbing cold blue,
Or the red of Hades’ grill.
A fraction of a second,
Do you lose, or maybe still,
Pass it to the left,
And collect your mighty kill.

Add another bullet,
The third round begins.
Soon as the spinning stops,
Oh no, the game starts in.
Please, no I.O.U.’s,
No markers for death.
Does anybody play? Anybody,
Somebody, anybody play.