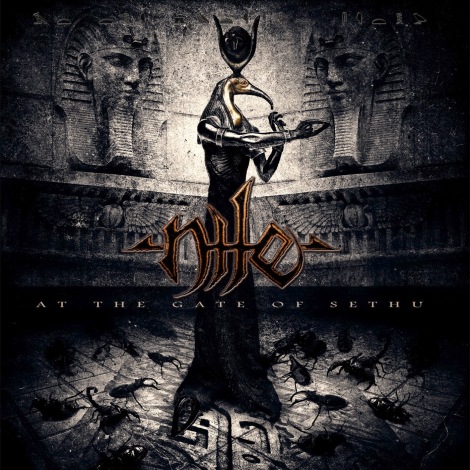 At the Gate of Sethu is the seventh studio album by American death metal band Nile. The album was released on June 29, 2012, in Europe, and on July 3, 2012, in North America through Nuclear Blast.[3]

On May 25, 2012, the albums second track, “The Fiends Who Come to Steal the Magick of the Deceased”, debuted on Noisecreep.

All songs written and composed by Nile.

1. Enduring The Eternal Molestation Of Flame

2. The Fiends Who Come To Steal The Magick Of The Deceased

I am Re
Who protects himself
Nothing can harm me

I am Re
Who protects himself
Nothing can harm me

3. The Inevitable Degradation Of Flesh

4. When My Wrath Is Done

Then will wrath
seem the better part of Discretion

Then will my Wrath be Done
KnumuKhufu!

6. The Gods Who Light Up The Sky At The Gate Of Sethu

7. Natural Liberation Of Fear Through The Ritual Deception Of Death

9. Tribunal Of The Dead

11. The Chaining Of The Iniquitous

The Inquitous Cannot Escape
Condemnation according to the will of Ra

Bow Them down and Make them Prostrate
Reduce them to Helplessness

Great Suffering shall you cause upon The Immortal

The Chaining of the Iniquitous