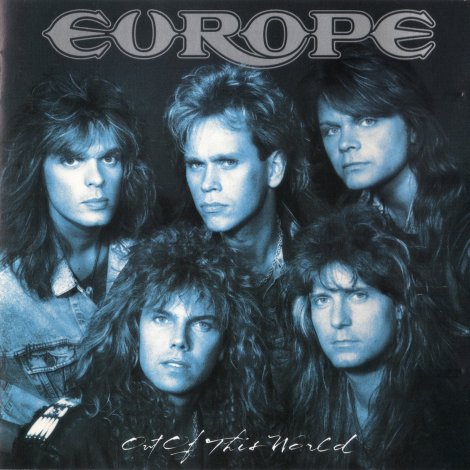 Out of This World is the fourth studio album by the Swedish heavy metal band Europe. Released on 9 August 1988 through Epic Records, the album was a huge commercial success selling over 1 million units in the United States alone, peaking at number 19 on the US Billboard 200 chart and reaching high positions in charts worldwide.[3] It was recorded at Olympic Studios, London, England.

Six singles were released from the album: “Superstitious“, “Open Your Heart“, “Let the Good Times Rock“, “More Than Meets the Eye“, “Sign of the Times” and “Tomorrow”. “Tomorrow” was only released in Brazil.

“Superstitious” was the first song on the album, written by Joey Tempest. It was the first single released from the album and is arguably one of Europe’s most recognizable and popular songs. The song peaked at number 9 on the Billboard Mainstream Rock Tracks chart and peaked at number 31 on the Billboard Hot 100. The song reached number 35 on the Canadian Singles Chart. The song was released in Australia, Europe and New Zealand in July 1988. “Superstitious” reached the UK top forty at 34. “Superstitious” continued the trend of lower-charting singles when it charted. The song reached number one in Norway and their homeland Sweden.

Allmusic gave Out of This World three out of five stars. Reviewer Andy Hinds said, “Europe produces made-to-order lite metal with admirable craftsmanship and occasionally memorable hooks. “Superstitious” even has a disarming gospel quality. This is hard rock with all the edges sanded off. Capable lead singer Joey Tempest carries the tunes with nonthreatening panache, while Kee Marcello (who proved his virtuosity on Europe’s previous by performing “Flight of the Bumblebee”) provides plenty of nice guitar solos.”[1]

Out of This World included the hit singles “Superstitious“, “Open Your Heart” and “Let the Good Times Rock”, all of which had accompanying music videos. Only “Superstitious” charted in America. “Open Your Heart” and “Let the Good Times Rock” charted in the UK. The other singles, “More Than Meets the Eye“, “Sign of the Times” and “Tomorrow”, didn’t chart. “Tomorrow” was released in Brazil only. “Superstitious” was the most successful song from Out of This World on the rock charts, reaching number thirty one on the Billboard Hot 100 and number nine on the Mainstream Rock Tracks.[7] “Superstitious” was released in the fall of 1988 and became arguably the band’s most recognizable song from the album. Its music video received heavy airplay on music television.

Prior to the release of the album, in the summer of 1988, the band travelled the U.S. together with Def Leppard. However, the band’s management considered a promotional tour of Europe (the continent) more important and made the band withdraw from the highly successful American tour. After the promotional tour was over, the band set on rehearsing for the upcoming Out Of This World Tour, which began with a bombastic show (60,000 visitors) in Mumbai, India in November 1988. Then the band flew to Japan (where they filmed the video to “Let The Good Times Rock”). The scheduled tour of Australia was, however, unexpectedly cancelled. From January to April 1989, the band toured all over Europe. In some places, in Germany particularly, the band did not manage to fill up the arenas and concert halls like they had done during the Final Countdown Tour, despite more and more good reviews from the musical press. In May 1989 the band was supposed to go over to the USA again. But the album sales were not as high as had been expected. So in the end, there was no U.S. tour and the only concert the band played in the summer of 1989 was the legendary festival in Milton Keynes (UK). After that, the band decided to move to Los Angeles and compose new songs for the next album.

I’m not superstitious, I have no doubt
That there’s a reason, how things turn out
While things are changin’ from day to day
I’ll keep this feelin’ with me all the way

And I want you to know
That you’re on my mind
Every day, all of the time

And I want you to know
That you’re on my mind
Every day, all of the time

So keep on walkin’ and we’ll make things right
Yeah, keep on dreamin’ each and every night
We’re gonna make it, that’s what we’ll do
Right to the end girl, we’re gonna walk on through

Oh baby tonight we will celebrate…

4. More Than Meets The Eye

Now he’s in for trouble
His luck has turned away, nobody seems to care
Well there’s a cold moon risin’
And another lonely day has passed and she’s not there

But it’s more than meets the eye…

You look out that window
For someone you know
But it all looks the same and time and again
It hurts you so
You wonder if always
You’ll stand on your own
But hear in your mind, you’ll get through this time
You’re not alone

When time seems so lonely
And your day seems too long
You wonder if you will ever get through
And still be strong
With eyes full of sadness
You stand on you’r own
It tears you apart, but you know in your heart
You’re not alone

Ready or not but i waste no time…

Rock me til I hit that floor…

It wakes him up, he turns around
And now he’s gone
He’s been waitin’ for this moment desperately
Now the time is right, he’s turnin’ back
He’s going home
Yeah it’s over now for everyone to see
This is the way it’s meant to be

It’s the way that we make things right…

It’s the way that we make things right…

I can walk on fire, it ain’t stopin’ me
It’s just showin’ me the way
Come thunder, lighting all over me
I’d still be on my way

You can put me through loads of trouble
But in anyway

It’s not a strange behavior, it’s the way I am
Nothin’ puts me down
And if a situation would get out of hand
I’d still be back around

It’s just the beginnin’ and not the end…

I can walk on fire, it ain’t stoppin’ me…

It’s just the beginnin’, and not the end…

Oh who took that shot…

One night she came, in from the cold
Like a long lost friend, someone to hold
She said, don’t ask me now
Cause what’s in a name
But when I’m gone you’ll neverbe the same

She came from far, with so much to tell
Cause when you’re lookin’ for love
You can walk through hell
Just like a ricohet, she might come and go
And one look can say more than you’ll ever know

So won’t you hold me now…

So won’t you hold me now…

We keep on headin’ through
Lights and shadows

Now the tower’s callin’, there’s no reply
And there’s nothin’ they can do
Now the night is fallin’ before their eyes
Still no one’s comin’ through, callin’

Somewhere out in time, God knows what’s on his mind
Is there a reason for his doubt
Somehow unaware just like he didn’t care
There must be ways of gettin’ out

Walk by my side, and follow my dreams
And bear with my pride, as strong as it seems
Will ou be there tomorrow