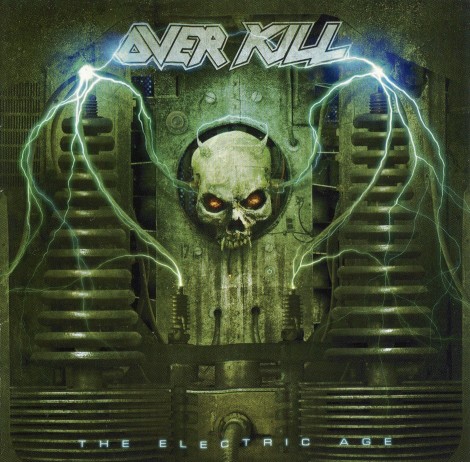 The Electric Age is the sixteenth studio album by the American thrash metal band Overkill, which was released on March 27, 2012 in the U.S. on E1 Music and in Europe three days later on Nuclear Blast.[11]

The Electric Age debuted at #77 on the Billboard 200. This was the first time in the band’s 32-year career that they have cracked the Top 100 on that chart.

All Gods’ children, there they go, taking the free ride

Just can’t win for losing, stare ’em in the eye
An ego made for bruising, a heart that you can’t buy
If patience is a virtue, let’s set out to sin
I’m all worked up in the desert heat, here I go again
I never seem to smile, you’ll find me in the dirt
Your lovable reptile, yeah for what it’s worth
I’m poison to your happiness, poison to this song
C’mon down, c’mon down to the ground so we can sing along

Plug me in, yeah, now set me free
I got a two fang grip that you should see
All wrapped up down, ’round your leg
Let me loose, I’m a powder keg
I love you

I’m ya satisfaction, give ya skin a glow
The number one attraction, apples packed to go
C’mon down the garden, original sin
Got a two fang bite in the overnight, here I go again
All about just living, living this or that
Shake it up and lay it out, the pigs are getting fat
Bite me as I slither, rape me as I bake
Plug me in baby, then turn me on
I’m your Electric Rattlesnake

3. Wish You Were Dead

Hey baby, shine the light on me
As I shoot across the sky
Hey baby, I’m your Superman
And somebody gonna die

Got me spinning in circles
Hanging by a thread
If I had one wish to use, I swear it
I wish you were dead

Hey baby, shine the light on me
As I shoot across the sky
It’s all up to Batman
And somebody’s gonna die, don’t ask why

We got our retribution
Got the final done
We got the spark, we hit the mark
And the killing’s just begun

Sweet electrocution
Sweeter by your side
Let it go, let it fly to the sky
And we die

Got me spinning in circles
Hanging by a thread
If I had one wish to use, I swear it
I wish you were dead

Wish you were dead

Hold your feet to the fire
Hold your face to the ground
Hold on tight, you’re a target baby
Drop the hammer down
I’m a long life, loving hate
I’m a bomb that makes no sound
Could you please, would you loosen these
I’m about to fucking drown

In a mock execution
In a house of gag and bound
Not the best solution
Drop the hammer down
I’m a long life, hating love
I’m under my dirt mound
If you could stand where we stood
We’re not fucking around

Drop dead dreams in a deep, dirt ditch
Buried by a shovel hand
Dead screams from the son of a bitch
Coming out to beat the band
Oh baby how I love your bite
Turn my smile upside down
Oh baby how I hate your light
As you drop the hammer down

Twisting and turning the incessant burning of night
Never quite learning the truth, wrong versus right
Wings that are broken, words never spoken in flight
The future now open, then flashes to hide out of sight

Don’t you look so fucking sad, I’ll beat you like you never had
Can’t hide behind the purity, they’ll be no more security
God’s not here to serve you now, I;m here to give and show you how

Deadly sensation, the cold liquidation unfolds
Disintegration, in pure isolation they fold
Wheels that are broken, once were outspoken and rolled
The future now open, explode to lose all control

Black ring painted ’round your heart, this is where we’re going to start
Can’t hide behind that riddled soul, I can see right through the holes
God don’t want to beat about, let’s clean it up and sort it out

Name the father, son & the fixer
And to the warmth we all feel inside
Strap it on and pour the elixir
To the days we count as alive

Seem to pray whenever I need it
Seem to sin whenever I want
Strap it on intending to bleed it
An easy mark, so nonchalant

Amputated spirit, executed soul
None but the shell of before
Exterminated feel it as it fills the hole
Here them screaming, they want more
More

Suck it up, it’s a new sensation
He’s a 21st century man
Hooked on into the new vibration
You can tell by shaking his hand
Feeling his head throb, he lights up a flash mob

Suck it up as the worlds collide
He’s a 21st century man
Living large than he’s cast aside
There’s got to be a better plan
Preparing for the next war, iPhone in his hand

Feeling his heart jump, turn up the heat pump

We ran it out, took another chance
Between the real and the disappear
We turned about, did the devil’s dance
Screamed we got to get on out of here
There’s no rest for the hunted
They only live to stay alive
So we took our chance with the devil’s dance
And kicked it into overdrive

First in and last out, a thorn in the side
First in to fight, let it ride

Got a lot of mouth for a Jersey white boy
Beat the drum, now you’ve gone too far
Drag it out, eat it up, enjoy
Old wounds, brand new scars

The screams would come, keep us up at night
I couldn’t even sleep a wink
Now I beat the drum, find a strange delight
Knowing the my eyes don’t blink
There’s no meat for the hungry
They only eat to stay alive
So we screamed so loud, that we cleared the clouds
And cheered the swan to dive

The screams would come, keep us up at night
I couldn’t even sleep a wink
Now I beat the drum, find a strange delight
Knowing the my eyes don’t blink
…..Head don’t think

So you see my friend, there is no end, this was only yesterday
So we burned the hope, we took all the dope
It what you carry what it weigh
There’s no hope for the hunted, he only play to live by chance
And the overdrive kept us all alive, as the fires burned
At the devil’s dance

9. All Over But The Shouting

Once upon a time
When you had us all in line
Thought that we would never learn
The word out on the street
Was you never felt the heat
Even when the fires burned
Then the dogs of war
Barking at your door
Is this what it’s all about?
So we broke the deal
It’s how it made us feel
Drummer started on the shout

Heard a thousand drummers on a solitary light
Heat of a thousand summers explode into the night
They hid behind the curtains, their faces were concealed
A voice above the ashes screamed
I want to make a deal
I’m back on my heels

Cold calculation got them to fall into line
Annihilation, got them working the shine
They scream and shout
All over but the
Beat generation in a room full of war
Evacuation as the stones hit the door
They want out, all over but the shout

So, once upon a time
When we lit the line
Thought that we would never learn
The word out on the street
They melted in the heat
Even when the fires burned
Then the dogs of war
Scratching at your door
Is it what it’s all about?
So we broke the deal
For everything you steal
We start the drummer on the shout

Hey man, what’s it gonna be?
Indecision is killing me
Hey now, turn around
as you’re clawing at the ground
It’s about to get away
Living in America
Got the mass hysteria
Burning on the right
As you’re putting up a fight
And it’s just the price to pay
For another perfect day

hey man, it’s a wild thing
Getting what you’re going to bring
Hey now, let it out
As it covers up the doubt
And you keep the dogs at bay
Living in the perfect dream
Riding on the laser beam
Tuck ’em in at night
Get a sweet dream bite
And that’s just the way it goes
The whole thing fucking blows