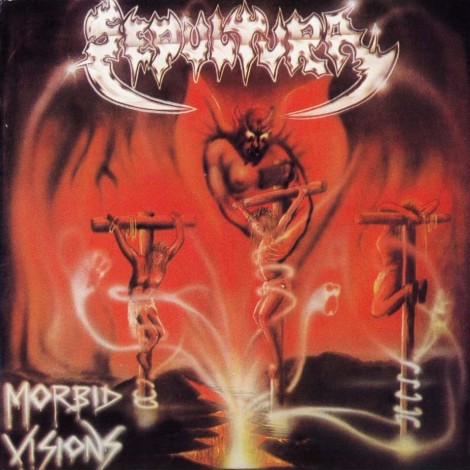 While later albums have a more political edge, Morbid Visions (along with the Bestial Devastation EP) is notable for “Satanic” themes. The band said many lyrics were fashioned after those of Venom and Celtic Frost, as they could not write in English at this point; as late as 1987, Max Cavalera was still translating his lyrics word-for-word, as evidenced by the demo “The Past Reborns the Storms”.

The production of the album is rather poor. In the liner notes of Roadrunner’s reissue of the album (which includes the tracks from the EP Bestial Devastation), Cavalera admits that the band neglected to tune their guitars during the sessions.

The original vinyl pressings of Morbid Visions featured the first movement of Carl Orff‘s Carmina Burana (“O Fortuna“) as an unnamed introduction. This composition was left off the CD re-release, probably because of copyright issues.

The Roman empire has crucified the messiah
The bestial power as sacrificed your Gods
Feared by this power, the cross he’ll carry
And visions of destruction, this night you’ll see

The cristians, today they still cry
But the bastards adore images
Remembrances from the past, from the crucifixion
Rotting christ, nailed to cross

From the semen of the mankind
We’ll spread our seed
And we’ll show to the devoted
The truth, painful truth

Endless war, endless screams
In the boundaries of Hell we live
Total death, total hate
On the devastated plains we fight
Evil minds, insane minds
Mutilated corpses over the ground
Soldiers of Hell, soldiers of death
Seeking victims to exterminate

Black death, black night
Where the spirits leave their crypts
Torture souls, drifting souls
By the world of hate
Multiradiation, multideath
Destroys and kills
Even in the deep of Hell
Fallen corpse, fallen angel
Total injury is the only rule

Blood world, rotting world
Corrosion of insane human mind
Black pest, devastating pest
Under the evoking circle we pray
Baptized skulls, evil skulls
People screaming chained underground
There is no return, there is no escape
In the evil refuge you are slaves

The messiahs, redeemers of mankind
Chained in the valley of Hades
Crowds blinded by evil
Only death is real

Total slaughter is only rule
Kill to live, live to kill
Mass extermination, black death
The corrosion of the world is done

The radiation corroses our faces
Over mutilated corpses we have to march
Destructed empires, where is God now?
That calls himself the redeemer of the mankind

The black sunset breaks out the silence
The last scream of pain is heard
Death burns it’s victims
Sending their souls to Hell
Feel the blade in your sacrifice
Now is the time to abjure Gods
The black war comes with the wind
There is neither Heaven nor Hell, but only war

We’ll show to the world our hate
The priests will have their final torment
We’ll spit on the churches, we have an ideal
Black tortures you’ll feel
The mankind goes to suicide
Thay have faith in Gods as false as their name
Christ, preacher of goodness and beauty
Gods, preachers of lies and destruction

The Gods grave doors
Is below his brains
Rotenness and dirtyness go out
By a simple prayer of mercy
The reason of his death will be your blame
Your master is buried in the abyss
The dead, they already celebrate his arrival
In the altar of fallen Gods, throne of his own existence

6. Show Me The Wrath

8. Empire Of The Damned

There is an empire in the boundaries of Hell
Where only the death can reach and only demons reign
Place of lust, blasphemy and eternal darkness

Illusions of the darkness
Power of death
strength of Hell
Empire of the damned
On the black hills of Meggido you’ll find
A place so cold as the mist, so dark as the night
Black armies march to the hills
To make power of the reign of darkness crow

One day this empire will be discovered
For the judgement of mankind
Gnash of teeth and endless cries will be heard
The Hell there’s to bury, the Heaven there’s to dethrone