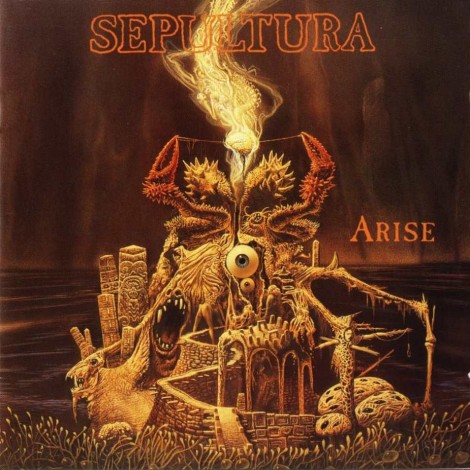 Arise is the fourth studio album by Brazilian heavy metal band Sepultura, released in 1991 through Roadrunner Records. Upon its release, the album received top reviews from heavy metal magazines such as Rock Hard, Kerrang! and Metal Forces.[1]Arise is considered Sepultura’s finest hour among longtime fans.[2] While the music on Arise was mostly in the samedeath/thrash style as their previous album, Beneath the Remains, it was clear that the Sepultura sound was acquiring an experimental edge.[3]

The album presented their first incursions with industrial music, hardcore punk and Latin percussion.[4][5] The tour (1990–1992) that supported the album was the group’s longest at that time, totalling 220 shows in 39 different countries.[5] During this trek, the album went gold in Indonesia—the band’s first music industry certification.[6] By the tour’s end, Arise had achieved platinum sales worldwide.

In August 1990, the band travelled to Florida, to work on the album. Scott Burns reprised his role as producer and engineer, and now with a major advantage: Sepultura were at his home base, Morrisound, a studio properly equipped to record their music style. Their label Roadrunner granted a $40,000 budget, which helped explain the album’s improved production values. That allowed Igor and Burns, for example, to spend a whole week just testing the drum kit‘s tunings and experimenting withmicrophone practice.

Although lead guitarist Andreas Kisser stated that Arise “took a lot of the same direction” as their previous LP, Beneath the Remains, it was clear that their music had somehow changed.[3] Sepultura’s usual breakneck pace became toned down a bit;[4] drummer Igor Cavalera started using groove-laden rhythms. According to metal specialist Don Kaye, the album “represented the band taking their initial death/thrash sound to its logical conclusion.”[3]

Arise also found the band opening up to non-metal influences.[4] Bands such as Einstürzende Neubauten, The Young Godsand Ministry were already part of Sepultura’s listening habits, and slight touches of industrial music can be traced through the use of samples and sound effects.[5]Although Sepultura’s Extreme metal roots are prevalent throughout the album, tracks such as “Dead embryonic cells“, “Desperate cry” and especially “Under Siege (Regnum Irae)” display very experimental sounds, incorporating melody, acoustic guitars and weird sound effects; wich were relatively innovative and rare features for adeath metal band at the time. A trademark of a later phase—Latin percussion and “tribal” drumming—made its first appearance on the song “Altered State”. The band’s old love for hardcore punk is evident on “Subtraction” and “Desperate Cry”.

Just one day after finishing the recording of Arise, the band embarked on a small headlining tour with extreme metallers Obituary and Sadus.[10] That was the start of the longest promotional tour of Sepultura’s career, a worldwide affair that would span two full years.[5] In January 1991 they were invited to play for at the Brazilian music festival Rock in Rio 2 where their performance was watched by a 70,000-strong crowd.[11][12]

Before heading out of Brazil on a mid-1991 European tour, Sepultura performed one more concert in São Paulo, the country’s largest city. It took place at Praça Charles Miller (in front of Estádio do Pacaembu), on May 11.[13] Local military police expected 10,000 to attend. 30,000 showed up instead, making crowd management nearly impossible. Six people were hurt, 18 were arrested and one was shot dead. A week before, a young man was stabbed to death at a Ramones concert in São Paulo, during a brawl between headbangers and skinheads.[14] These events were followed by a huge mainstream media backlash throughout the country against rock music.[15]

Sepultura’s three-month tour with thrash metal groups Sacred Reich and Heathen was a critical success. For the first time they appeared on the cover of best-sellingBritish heavy metal magazine Kerrang! and major pop weeklies such as Melody Maker and NME published long feature articles on the group. While in Spain Sepultura recorded their Under Siege video, which included their Barcelona concert and interview footage with all four members of the band.[16] After Europe, they toured North America with grindcore pioneers Napalm Death, New York City hardcore punk group Sick of It All and Sacred Reich.[17] Sepultura wrapped up the year doing a briefGerman tour with NWOBHM legends Mötorhead and Florida death metal group Morbid Angel in December.[18]

Sepultura then managed to secure a slot in two of the most sought after rock tours of 1992. One was done with ex-Black Sabbath singer Ozzy Osbourne,[19] who was promoting his multi-platinum solo album No More Tears while the second tour was with industrial metal stalwarts Ministry and influential noise rock unit Helmet.[20][19] Both of these American acts had just released the most successful records of their careers – namely Psalm 69 and Meantime.[21]

A remastered version of Arise was released by Roadrunner in 1997, with added notes by music critic Don Kaye and four bonus tracks: a cover version of Motörhead‘s “Orgasmatron“, a rough mix of “Desperate Cry” and two previously unreleased songs.[3] A previously unavailable photo shoot from the Arise period was also included in the expanded CD booklet.

Arise garnered praise from a wide variety of sources. By the time of its release, major Brazilian newspapers were already aware of the band’s existence, and advance copies sent to them were generally met with positive reviews. Artur G. Couto Duarte, writing for O Estado de Minas, described Sepultura’s soundscapes as “stories describing barren worlds where disease, hunger, torture and death reign supreme”. Folha de S. Paulo‘s Sérgio Sá Leitão pointed out Sepultura’s increasing compositional skills, drawing attention to how the band’s occasional use of restraint benefited their songs as a whole.[11]

The international pop press also took notice of Brazil’s premiere metal group. Top British weeklies such as the Melody Maker and NME wrote lengthy articles on the band, praising them. A Melody Maker journalist wrote: “Sepultura is […] a Brazilian metal band which seems to be in the verge of getting big – maybe even bigger than Slayer, their only true rival.” Genre-specific magazines also reacted positively to the group. Germany’s Thrash elected Sepultura the best band in the world, defeating major contenders Metallica and Slayer. Sepultura were also prominently featured on the biggest metal publications of the time, such as Kerrang!, Rock Hard and Metal Forces.[1]

Throughout the years, Arise has been continuously praised by the music press, not only as a landmark release of Sepultura’s career, but of extreme metal in general. In November 1996, Q magazine stated that “Arise remains their thrash high water mark, sounding like an angry man throwing tools at a urinal while reading the Book of Revelations.”[26] Allmusic contributor Eduardo Rivadavia considered Arise as “a classic of the death metal genre.”[27] The album also appeared in the book 1001 Albums You Must Hear Before You Die (2006), edited by writer Robert Dimery.

Track 10 was both a bonus track for the Brazilian release and a b-side of the “Dead Embryonic Cells” single. Tracks 11–13 are only available on the 1997 remastered re-release. Track 10 was also a bonus track on the European Picture Disk Release.

Obscured by the sun
Apocalyptic clash
Cities fall in ruin
Why must we die?

Obliteration of mankind
Under a pale grey sky
We shall arise…

I did nothing, saw nothing
Terrorist confrontation
Waiting for the end
Wartime conspiracy

Land of anger
I didn’t ask to be born
Sadness, sorrow
Everything so alone

Land of anger
I didn’t ask to be born
Sadness, sorrow
Everything so alone

Chaotic violence in my eyes
This whole world moves backwards
Peace, another sign that lies
Life today is not worth the pain

On the radio, another homicide
Inmates suffocate in jail
Severed heads of revolt
I wish I’d never been born

I can’t trust anymore
Criminals within the law
I have something to say
Where I live, don’t believe in another day

Heresy and graft
Apartheid
Same religion that saves – damns you!

Subtraction of personality
Within the human race
You’ll always be

Subtraction of personality
The Earth will never
Be born again

From beyond – an empty world
Infected voice – a scream alone

Looking behind I’m not alone
Are they friends or enemies?
Going insane without a cure
Scarring my eyes, visions lost

From beyond – an empty world
Infected voice – a scream alone

I am the one, Orgasmatron, the outstretched grasping hand
My image is of agony, my servants rape the land
Obsequious and arrogant, clandestine and vain
Two thousand years of misery, of torture in my name
Hypocrisy made paramount, paranoia the law
My name is called religion, sadistic, sacred whore.

I twist the truth, I rule the world, my crown is called deceit
I am the emperor of lies, you grovel at my feet
I rob you and I slaughter you, your downfall is my gain
And still you play the sycophant and revel in my pain
And all my promises are lies, all my love is hate
I am the politician, and I decide your fate

I march before a martyred world, an army for the fight
I speak of great heroic days, of victory and might
I hold a banner drenched in blood, I urge you to be brave
I lead you to your destiny, I lead you to your grave
Your bones will build my palaces, your eyes will stud my crown
For I am Mars, the god of war, and I will cut you down.